With two small children, our family goes through a lot of fruit. A few weeks ago, it was late on a Sunday and we were facing the prospect of starting the week sans fruit. Mr Firehouse volunteered to go to the shops as the grocery shopping was often a task that fell to me. As he headed out the door, he quickly called out to me to confirm what I had  “mandarins and apples” I called out. He returned some time later and emptied the shopping diligently into the fridge. It was only at dinner time that I opened the fruit and vegetable tray to rummage for a post-dinner mandarin. Instead I found twenty. I called to Mr Firehouse who sheepishly confirmed that he had heard “apples and mandarins” as what we needed, not what we already had an abundance of.

Now we have a running joke in the family, we have to double and triple check every item on the shopping list whenever Mr Firehouse ventures to the shops. So, when I sent Mr Firehouse to the shops multiple times over consecutive days, he was understandably nervous.

“You’ve put 3 packets of cream cheese on the list, are you sure?”

“Yes!” I’d have to say, and reinstate multiple times.

Now in all fairness, I did feed this dessert to him multiple times over a week. I was fixated on getting it perfect and perhaps his apprehension at returning home with the wrong thing was probably not misplaced.

In the bowl of a small food processor crush the biscuits and nuts. I like to do the nuts first, tip out and then do the biscuits. That way I can crush the biscuits till finely ground and the chop the nuts into larger pieces for more texture. Add crushed nuts and biscuits to the melted butter and set aside. You can easily do this step with zip loc bag and a rolling pin, or mortar and pestle. Choose your poison.

In a medium bowl, place the cream cheese, cream, icing sugar and vanilla bean paste. Whisk until smooth and no chunks of cheese remain. This can be done with a hand mixer too.

I used drinking glasses to serve these but mason jars, stemless wineglasses will all work. In your glasses, start by placing the biscuit crumb mixture down the bottom. Place some curd on top and then divide the cream cheese mixture evenly between the glasses. Place the remaining the biscuit mixture on top and finish with the remaining passionfruit curd.  Chill the finished cheesecakes for a  couple of hours before serving. 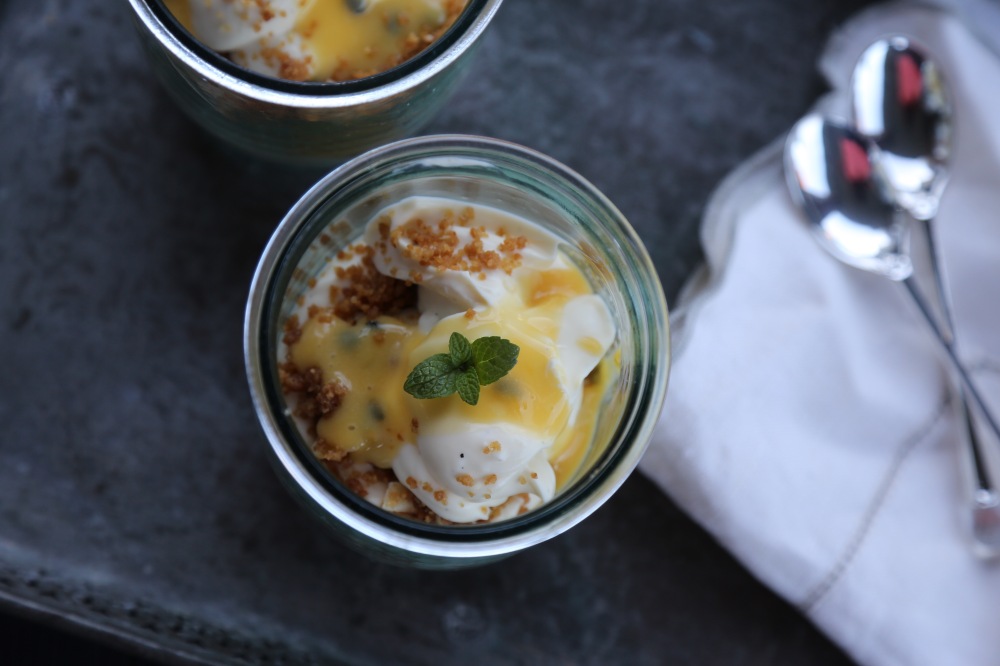 Combine all the above ingredients in a heat proof bowl. Place over a pan of gently simmering water and whisk continuously until thick and glossy. Place in the fridge to cool .