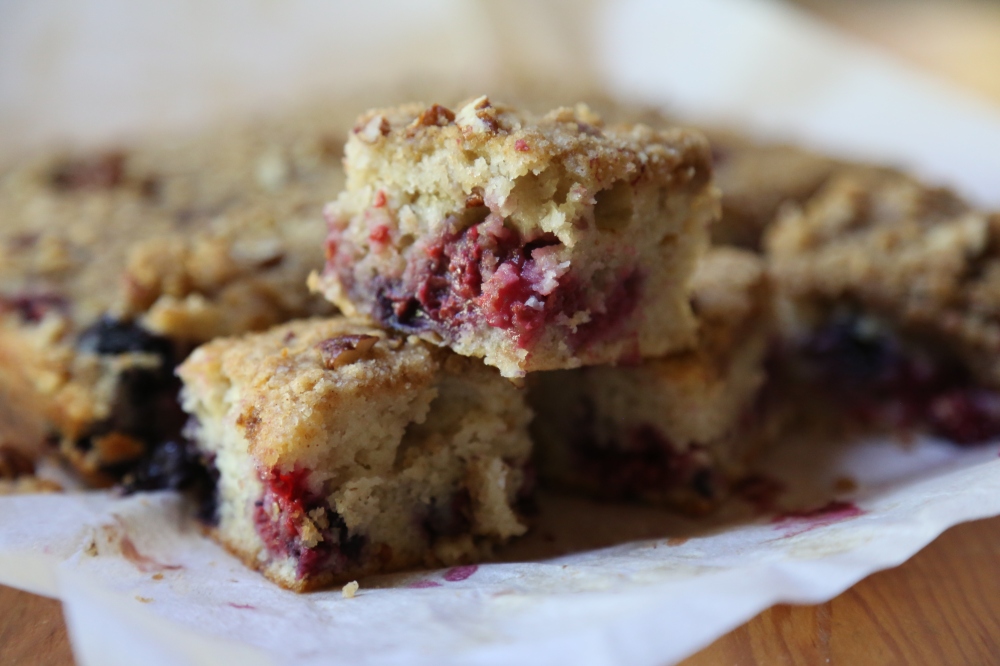 A couple of months ago we were at another baby’s birthday party at a park. Mr C was in his element, running around, terrorising adults and children, and being the centre of attention. Come cake time, he was nowhere to be found. I was getting a little worried when I spied a curly head peering out from under the massive cake table. There he was, staring intently at the baby’s mother cutting the cake. Mouth open and agape.When I approached him he looked me in the eye and said “cake”. I think he might just be his mother’s son. Of course, there was no denying him cake after that.

Nowadays he can identify the difference between a muffin “mussin” and cake. A muffin comes in a wrapper and a cake needs to be sliced. At afternoon tea-time when he sees me opening the freezer to grab a muffin, many an excited squeal can be heard.

The long and short of this is that I need to make sure that the baking I do is Mr C  friendly and generally on the healthier side of things. This means recipes with lots of fruit and veg, as little sugar as I can get away with and added bonuses like oats and nuts. Mr C is also very into helping at the moments so unless I bake during nap time, the recipe has to be simple enough that he can help with “missing”. Admittedly this results in about  three times the mess, but the kids loves it!

This recipe originally called for 1 cup of sugar, but I decided to halve it and substitute it with apple sauce, following the guidelines here.

I also added some nuts to the crumble topping for some extra crunch.

In small bowl mix together the crumble ingredients, except the pecans, gently with your finger tips until the mixture resembles coarse bread crumbs. Add the pecans and refrigerate while you make the cake.

In a small saucepan place the stick of butter and slowly melt over a medium heat. Bring to the boil and watch the butter foam. After a few minutes you’ll notice some brown appearing at the bottom, remove from the heat at this point and leave to cool. The butter should be lovely and nutty in flavour at this point.

In a large bowl mix together the flour, sugar, baking powder and salt. Add the frozen berries and coat well with the flour mixture.

In a second bowl mix together the egg, egg yolk, apple sauce, milk and cooled butter.

Mix the dry and wet ingredients together before pouring into the prepared tin. Sprinkle the crumble topping on top and bake in the oven for 45-55 minutes or until a skewer inserted in the centre comes out clean.

This recipe is suitable to freeze!